When this little restaurant opened its doors in Hanoi, little did the owners know that it would be one of the most famous restaurants in Vietnam This humble restaurant is situated in the capital city of Vietnam and was serving up bowls of delicious Bun Cha, which is a rice noodle dish with vegetables and grilled pork. If you’re strolling down the street, it’s easy to miss this “hole in the wall” (although they have three storeys). It doesn’t look like much from the outside and was their customers were mostly locals who wanted to fill their stomachs.

Little did the owners know that one day their lives would change. The owners of the restaurant were to receive two very high profile people but they had no idea who they were. They just knew that there would be international journalists and reporters coming to eat at their little restaurant. But when they saw who were entering their doors, their restaurant changed forever. It was Anthony Bourdain and Barack Obama, one a very famous chef and TV personality, the other (then) USA:s president.

The reason for their visit was because Anthony Bourdain was going to film a segment for his highly popular television series. They ordered a six-dollar meal, which included the beer. Their meal consisted of Bun Cha and Nem Hai San, which are spring rolls filled with different types of meat and vegetables. They ate it all while sitting on the classic, plastic stools, just like any other local does. When they finished their meal, a huge crowd awaited them with cameras and questions. Ever since then, Bun Cha Huong Lien would be commonly known as Bun Cha Obama.

Nowadays, it’s one of the most visited noodle soups restaurants in Vietnam. Everyone wants to know what the hype is about and if the food is, indeed, as good as it seems like. Going from having only a few reviews on Tripadvisor to having more than 600 shows how Anthony and Obama’s visit changed the restaurant owners lives forever. Many of the reviews are from tourists and expats who, after seeing Bourdain’s show, decided to pay a visit and try a bowl of Bun Cha. If you want to order exactly what Obama had, you can now ask for the “Combo Obama”.

Although it’s always been a busy place, it’s nothing compared to how it is now. If you’re planning on arriving here for breakfast or lunch, you might have to wait a while before getting a seat. This is the most popular time to eat Bun Cha. But it’s definitely worth the hype and the wait! Once you’ve gotten your meal, you’ll forget about the long crowds and only focus on the incredible taste. The best thing about it is that even though they became hyped and immensely popular, the prices still remain quite low. You can get a bowl of Bun Cha for only 40,000 VND, which is approximately 2 USD. Add a few beers to that and you’ll be walking out with a bill less than 5 dollars. Sounds like you’re getting quite good value for your money, right? 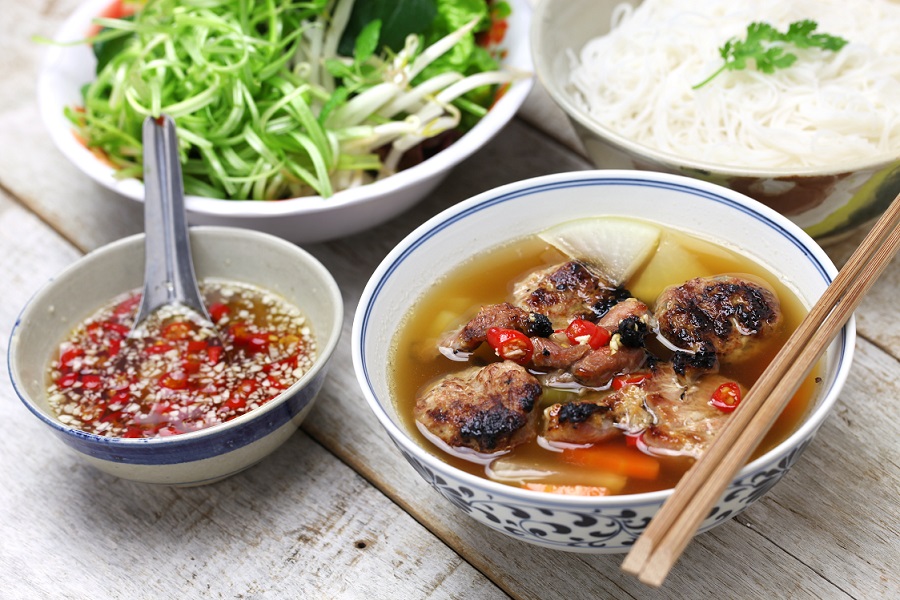 Bun cha is one of the oldest dishes in the north of Vietnam and also a huge favorite amongst both locals and expats who have tasted this dish. It’s fulfilling, healthy and tasty. The recipe is timeless and you can eat this dish anytime of the day, although the locals usually eat it for breakfast. But for the ones who haven’t gotten used to eating noodles for breakfast, you can come back for lunch or dinner. Or why not both! There’s a ton other things on the menu that’s worth trying as well, but if you’re here to try the dish that made this little restaurant famous – it’s the bun cha you’re looking for. And Obama and Anthony Bourdain certainly approved of it.

Are you interested in visiting this little pearl in Hanoi and start digging in on some delicious noodle soup? Then you should start planning your trip to Vietnam, one of the most beautiful countries in Southeast Asia. Besides digging in to some amazing food, you can also sunbathe on unspoilt beaches, go kitesurfing, hiking, canoeing in Halong Bay, visit temples, pagodas, try out some craft beer in Ho Chi Minh City or why not get something tailor made in Hoi An, the quaint little town that has charmed so many people? There’s so much to do and see in Vietnam that you might even feel a bit overwhelmed. It’s an amazing place to travel in.

Don’t forget to apply for your Vietnam visa, which you can get either through the Vietnamese Embassy or Consulate, or by applying online for either a Visa on Arrival or an E-Visa. If you apply online, you can do it wherever you are in the world. It’s simple, fast and you’ll be able to get it within just a few days, or hours if you need an emergency visa. It’s by far the most popular way to apply for a Vietnam visa.